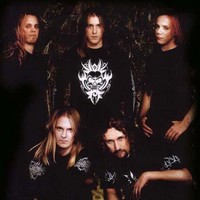 Sitting on a corner all alone,
staring from the bottom of his soul,
watching the night come in from the window

It'll all collapse tonight, the fullmoon is here again
In sickness and in health, understanding so demanding
It has no name, there's one for every season
Makes him insane to know

Running away from it all
"I'll be safe in the cornfields", he thinks Hunted by his own,
again he feels the moon rising on the sky

Find a barn which to sleep in, but can he hide anymore
Someones at the door, understanding too demanding
Can this be wrong, it's love that is not ending
Makes him insane again

Swimming across the bay,
the nit is gray, so calm today
She doesn't wanna wait.
"We've gotta make the love complete tonight..."

In the mist of the morning he cannot fight anymore
Thousands moon or more, he's been howling
Knock on the door, and scream that is soon ending
Mess on the floor again...

See what became out of that man