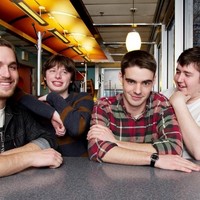 Trying hard not to look like I'm trying that hard
Failing miserably at everything, including that
Making plans in my head right before I go to sleep
Trying to think of who could make a better me than me
Maybe I'll shoot him an email
Maybe he'll give it a go
Then I'll be free to just evaporate, disperse, or implode
Picking at holes in my jeans
There's so much God in my gene pool
Not feeling lonely, I just like being alone

I've called A through F already but no one knows
Why one girl, one band, two paychecks are more than I can handle
https://www.coveralia.com/letras/two-good-things-modern-baseball.php
Mathematically that can't be more than one end of a candle
Bottom of the ninth, can't find my socks

Lord knows
I'm stuck between two good things, but I just wanna get out
Mom knows
I should have been home an hour ago
But I'm still outside, not doing anything wrong
Just walking in circles, replaying high school songs in my head
Because it's better than lying awake