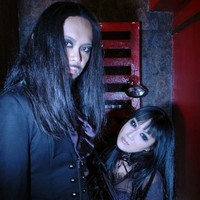 The sign of the ghoul in blood on their forehead
The ancient incantation to raise the dead
The gate of Yumi has opened, revenants walk the earth
Stalking mortal victims to sate their undying thirst

Hear their howling, face this nightmare
The zombie terror in their cold stare

Horror at the ominous cries on a moonless night
https://www.coveralia.com/letras/the-zombie-terror-sigh.php
Sinister cloying fog enshrouds this funeral sight
Visions from your nightmares are not of this earth
Called from worlds below, in necromantic rebirth

No moon shines and nothing divine
The abominable sign, vengeance is mine
I evoke the undead, your innermost dread
The sign on their forehead is bloody red