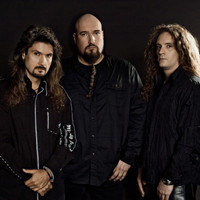 See the earth tear up, flames are rising high
Thunder's roaring like a beast
Modered hands and skulls appear in the flames
The Zombies obey to their priest
See the tries right there in the moonshine
Naked virgins chained to die
A crowd of sinners first made love to shame
Teared up assholes, hear their cries

Southcross Union
Rape you down to hell