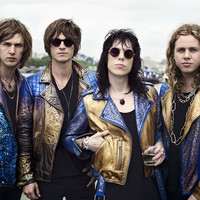 Milk in the fridge gone sour.
Ignorant faces, ice on my laces,
Delays on the underground.
Petrol is rising, leaders are lying,
Watching the world melt down.
Signal is fading, can't hear what you're saying,
My minutes are running out,
She makes me fell like
Woah woah woah.

The traffic is crawling, my wages are falling,
So long tip my holiday.
Sick of the warning, a different story,
With voices that sound the same.
https://www.coveralia.com/letras/she-makes-me-feel-like-the-struts.php
I wish it was cheaper, scared of the meter,
Watching the second hand.
Late to the station, lost in translation,
Stuck in a taxi cab,
She makes me feel like
Woah woah woah.

When I wander alone, and she tells me she's home,
Now I'm lost but it's me in control.
It's the thought of her face that helps me pick up the pace,
The days lost, but I know
She makes me feel like
When you're lifting the world but it's just too heavy,
She's my pick me up, pick me up, p-p-pick me up.