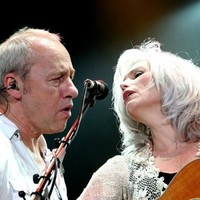 Me and my best friend Lillian
And her blue tick hound dog Gideon,
Sittin on the front porch cooling in the shade
Singin every song the radio played
Waitin for the Alabama sun to go down
Two red dirt girls in a red dirt town
Me and Lillian
Just across the line
And a little southeast of Meridian.

She loved her brother I remember back when
He was fixin' up a '49 Indian
He told her 'Little sister, gonna ride the wind
Up around the moon and back again."
He never got farther than Vietnam,
I was standin there with her when the telegram come
For Lillian.
Now he's lyin somewhere
About a million miles from Meridian.

She said there's not much hope for a red dirt girl
Somewhere out there is the great big world
Thats where I'm bound
And the stars might fall on Alabama
One of these days I'm gonna swing
My hammer down
Away from this red dirt town
I'm gonna make a joyful sound.

She grew up tall and she grew up thin
Buried that old dog Gideon
By a crepe myrtle bush at the back of the yard,
Her daddy turned mean and her mama leaned hard
https://www.coveralia.com/letras/red-dirt-girl-mark-knopfler-and-emmylou-harris.php
Got in trouble with a boy from town
Figured that she might as well settle down
So she dug right in
Across a red dirt line
Just a little southeast of Meridian

Yeah she tried hard to love him but it never did take
It was just another way for the heart to break
So she learned to bend.
One thing they don't tell you about the blues
When you got 'em
You keep on falling cause there ain't no bottom
There ain't no end.
At least not for Lillian.

But there won't be a mention in the news of the world
About the life and the death of a red dirt girl
Named Lillian
Who never got any further
Across the line than Meridian.

Now the stars still fall on Alabama
Tonight she finally laid
That hammer down
Without a sound
In the red dirt ground...