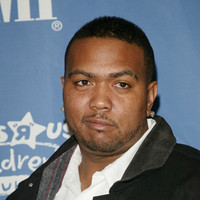 (1 Life)
Live, huh? Yeah
Y'all cats ain't ready, I'm just too much
When I was young, my mamma said I used to cuss too much
If I ain't known you twenty years, I don't trust you much
Roll with nuthin' but thugs and hustlers, yeah
I don't care if they crackin' down
I'mma drug graduate without the caps and gowns
I used to have a thing for buying gats and pounds
And I laugh in my rhymes cuz you cats is clowns

(Babe Blue)
Smash you down, patch you down
We take yo guns and we blast yo' round
Pass the crown to the new female king
This is real dog, you nuthin' but a Lee Nail thing

(1 Life)
Like the end of the world
We put it all to a stop and
Chicken heads and dimes, yeah, they all gon' flock
And you go against us and you all gonna flop
When we reign, you gon' need more than a mop

When we spit, yo we never run outta rounds
This is lifeball not football, you outta bounds
Since some of you people's houses I be cruisin' around
Slow it down cuz I think that I'm losing you now
For those that's not lost, tell y'all hoe's to stop
Cuz the union is in here, toast it up
When they shoot you suppose to duck
Look at them by the bar posing drunk
(Say what?)

(Babe Blue)
We don't care who we toast in here
We get you for how much you gross this year
You not a punk, you suppose to fear
Better not come out until the coast is clear
https://www.coveralia.com/letras/put-em--on--feat--static-y-yoshamine--timbaland.php

(1 Life)
Totin' beer, you hatin', sayin' how they get a deal that fast
But even without this rap game I still have cash
My mommy wears a money wiz, I'm trickin' buying Vickey Secret
Just to cover her punani hair

(Lil' Man)
Uh oh, you didn't think I was coming
My people can't stand for the little man
To rock without or with bad
I can determine what chu gon' do
Are ya gon' play it? Are ya gon' move?
The party ain't gon' start if ya don't dance
I don't care if you leave, but you still be my man
I don't get mad over silly pettyness
I say to hell with it, say oh well with it
Timbaland is known watch him make ya move ya feet
Make dope beats, rhyming sound so unique
His Beats are like Sean Archer and Caster Troy
Ya need the same identity to find how he soars
He's the wicked man, the wicked just begun
Call him Timbaland the resurrection
Clear-ese
Don't try to hide from ya fear
Clear-ese
Don't ya hear the set got in ya ear?
Clear-ese
This is the love man you're talking to
Clear-ese
His beats are dope, I try to tell you
Can't nobody see us in the nine eight
Or the nine nine
(Freaky freaky)
You're late
(Freaky) You're late
(Freaky) You're late
(Hey girls and guys)
You're late

Like y'all, the public
Is y'all the public
Ya do it so well
This goes out to y'all
Quiet Storm, Z-man
1 Life 2 Live
Little Man
Wanna thank y'all
For makin' us
Who we are today