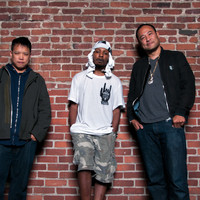 Okay, when I crash landed on the planet
I damn near couldn't understand it
And they couldn't understand it either
Talking out the side of their neck, it's just theater
We all know of imposing forces
Existing in space in time, matter coursing
Up and down, right or left, good or bad, black and white
Even day and night
Moon and sun, negative and positive
This is one of the first stages of blowing all the mist
To clear the window of perception
Of what is universally right and corrected
Now we are living in an alternate reality
In other words, everything's back which the eyes can see
Information universal laws and lying
The true guideline's actually right or wrong in real time

Yeah (real time not fake time)
Check it out though

Anyway, investigating the surface
On this new planet I bumped into a person
That told me he represents
The link between reality and illusion
Half true to a present, I peep the essence
The prison of bias, thought he manifested
I did the knowledge on the true purpose
Providing abbreviated facts to keep the planet in virtue
Controlling times, size, and bias
Dude thought he had the golden touch like Midas
It's like a planet-wide spell was cast
Everyone I asked, accepted the baloney and trash
And it's only a mask
Worn by a character who wants what you have
He thought I bought his ticket to this station
Because beliefs have infinite room for manipulation
Now that be so corny
Universal law is my core link
https://www.coveralia.com/letras/pay-the-price-deltron-3030.php
I wanted to talk, more of the people
He said "For what? duh, we all equal"
Everywhere I smell the place stink
And I told him man, "Seems like y'all gotta think big."
I said introduce deeper concepts
He told me "Hell nah fool, it wouldn't profit"
What do you mean it wouldn't?
What do you mean it wouldn't?
Awesome...

Okay, me thinks this stinks trickery
Some weak links in the chain of the mystery
Time for that mist to leave
By way of the breeze, flows formed by my speak
Dude obviously made it in the ranks of elite
Who sabotaged history to make it unique?
In aspects of superiority
He said "One for you, more for me"
I see, we ain't really equal
You part of the disagreeable people
Who broke off into a smaller pack
Who were dubbed the hard headed holograms
Y'all remember that they thought they was all of that
Lost all they had and came crawling back
After daddy had more jaw to jack
Said it's our fault calamities were caused, in fact
I had to reiterate, 'cause he don't believe his negative energy is fake
Nature itself is based on, organized chaos resulted in different states
You want to hide any deficiencies
It's all good, all fair game specifically
I told him "Keep ripping with me"
I'mma kick him in his nuts so hard his heart skips a beat