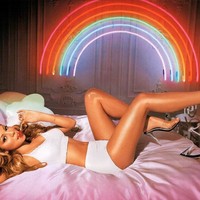 Baby
Don't you know that life is sweet

It swiftly goes, so I just gotta know
That it's more than lust (So in love)
That you're worth my trust (So in love)
You gotta search inside yourself and purely open up to me
Before I'll be with you
You gotta give me something sacred
More than merely physical (So in love)
One night's not enough
Gotta be certain I'm so in love with you

It's just another Saturday evening
He's watching all the girls go by
He finds your body kind of appealing
So he hits you with his favorite lie, yes
He's looking you over
He whispers, "Let's get to know each other better, baby"
He's moving in closer
But what you see may not be the entirety, so be wary

He's just out for the one night
He just wants you till he gets his way now, baby-baby
So don't gamble with your life
It don't pay, no

You see her standing there on the corner
https://www.coveralia.com/letras/one-night-mariah-carey.php
Sashaying as the cars go by
You casually look over your shoulder
As she winks at you and bats her eyes, yes
You're thinking about it
Your conscience tells you to go
But something's in the way now
The prospect's arousing
You think just this once can't hurt them
But you might have another thing coming

You're just out for a good time, baby
So later you'll forget her name now, baby-baby
So don't gamble with your life
It don't pay
Oh, no
Don't-don't, surely don't