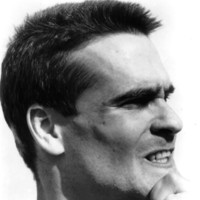 So!
Being a fan of the use of language
Being a fan of english, um
I got this amazing letter from a fella named boris.
And i wanted to read this to you.
He's, he's from um, the czech republic.
And i wanted to read you this quick letter by the cat because
He's just amazing. and he wrote one of the greatest sentences i
Haveve ever read in my life and i very much want to share it with
You. and i'm not trying to put the guy down, and i'm not saying
'oh he's dumb.' he's just a cat, he's trying to use english and
It's not his language. you know, but he's getting by. like, how
Well do you get by in czech? right. help?!? you know, you say
'check, please!' but you can't get by in czech. this guy's
Struggling in english and he's making it! and he's, he is, he
Is avant. he is, he's bebop! check this guy out.
This is 8/22/98 12:16 pm, los angeles, california
Boris checks in from the czech republic with this burning
Missive:
'hello henry,
I'm sorry for my english, but i understand english very little,
Thank you for your favour. my name is boris. have 24 years in
Right czech republic. you played in czech 2x. both concerts,
They were splendid.'
Ok. check out this sentence.
'on two concert, i'm shootive collective photo but small, fat,
Bald headed technologist be insane. '
https://www.coveralia.com/letras/language-henry-rollins.php
Let's milk it shall we?
'on two concert, i'm shootive collective photo, but such small,
Fat, bald headed techologist be insane.'
In translation, i think he took his roll of film to rite aid and
Had a bad rite aid experience. and you've all had that
Experience in thrifty and rite aid where time seems to slow
Down. i think boris got his film fucked up by the technologist
Who must be whooooooo!, a bit insane.
I go on.
'i compilation all material for you and band. i would like to
Read of your some book, but don't publish in czech language.
This book should be successful in czech republic.'
Sure.
'i you for very much autograph or publicity material or answer
In my letter. thanks a lot for it. i wish for you, band much
Power, health, and energy at further way music. goodbye in
Future concert in czech republic. boris'
The communique from boris makes me think of how great a
Feature-length movie with this use of language would be. could
You imagine an intense courtroom drama with scowling, wildly
Gesticulating lawyers making a case for their clients, kicking
It like boris? think of having the air flight attendent come on
With an "english as a second language" message. 'for
Making landing immediate time incredibly, broken moving not now,
Stupid motor on flaming. i declaration emergency!'