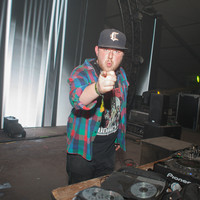 Now and then again somebody better warn dem
Bad gyal that got the man dem swarming
I'm not do-do-done done, so co-co-come, come
It's a rudegirl party

Let's go now, let's hit em
The body that me given let me move to the rhythm
Outside's live on the four wheel drive
The homicide [?] people kill for their lives
Inside, speakers shaking the walls
Step up and be like "yeah, they're about to fall"
All the b-boys I can hear shooting their synths
Like let em pick it up again

Electromagnetic cinderellas
I could be your superhero
Break down the mic like magneto
https://www.coveralia.com/letras/jump-ya-body--exmag-remix--kill-the-noise.php
Make way for the after-static
Wild child, downtown party addict
We're getting ready for the shakedown, breakdown
Get em up, get em moving around

Yeah, let's go now
Tick tock tick and I'm ready to throw down
Slow down, I'm holding my shit down
Team this up, leave em south-bound
Rebel with a cause
Hit em with a force, get em on the floors
With a no-good blade
Leave em slayed, dropped out on a rampage