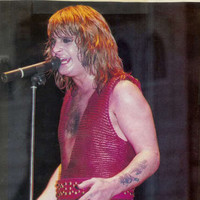 Has he lost his mind?
Can he see or is he blind?
Can he walk at all,
Or if he moves will he fall?
Is he alive or dead?
Has he thoughts within his head?
We'll just pass him there
Why should we even care?
He was turned to steel
In the great magnetic field
Where he traveled time
For the future of mankind
Nobody wants him
They just turn their heads
Nobody helps him
So he waits his revenge
Now the time is here
For Iron Man to spread fear
Vengeance from the grave
Kills the people he once saved
Nobody wants him
They just turn their heads
https://www.coveralia.com/letras/iron-man---children-of-the-grave-ozzy-osbourne.php
Nobody helps him
Now he has his revenge
[Children of the Grave]
Revolution in their minds - the children start to march
Against the world they have to live in
Oh! the hate that's in their hearts
They're tired of being pushed around
and told just what to do
They'll fight the world until they've won
and love comes flowing through
Yeah!
Children of tomorrow live in the tears that fall today
Will the sunrise of tomorrow bring in peace in any way
Must they live in constant shadow of atomic fear
Can they win the fight for peace or will they disappear? Yeah!
So you children of the world listen to what I say
If you want a better place to live in spread the world today
Show the world that love is still alive you must be brave
Or your children of today are children of the grave
Yeah!