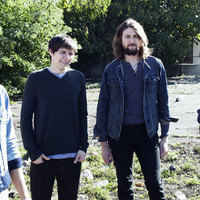 Well, they tell me where you're hiding
But through the haze there's no one there
Wonder if you care
Callin' out your name in the darkness

And I don't mind you disappearing
'Cause I know you can be found
Maybe liven' on the dark side of the street, damn
When we're livin' in the moment
And losing our grasp
Making it last with the grand parade in our past
https://www.coveralia.com/letras/in-reverse-the-war-on-drugs.php

And I don't mind you disappearing
When I know you can be found
When you livin' on the dark side of the street, damn
We just livin' in the moment
Making our past
Losin' our grasp through the grand parade

Is there room in the dark
In between the changes?
Like a light that's drifting
In reverse I'm moving