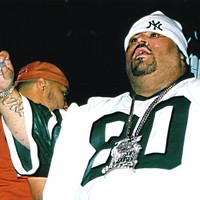 [Ashanti]
Something, I want to tell you
There's something I've been, thinking, that your, crew should know
Big Pun be the largest thang
Straight out of the projects
And that's how we roll.. roll..

[Big Pun]
You know I'm well known like Al Capone, fully blown like Ton' Montana
In a zone, sittin on chrome, stoned sippin on cham-pagna
Rollin ganja up in bible papers, see how high the lye can take us
Through the eyes of Christ, John, Elijah, Jacob
I make the kind of green a hustler dream
Bustin out the custard cream Viper
custom piped up with the mustard seams
Clustered green Fort Knox and hard (?) medallions
Mockin God even Italians see my batallion pull out the broad
I got the +Squad+ over-qualified, pullin over Karl Kani
Range Rover tilted, three-wheelted hydraulic slide
Sparkin lye in the clouds and reppin my housin
Like the Wu do in Shaolin

[Chorus: Ashanti]
Ooohooo there's, something, I want to tell you
There's something I've been, thinking, that your, crew should know
Big Pun be the largest thang
Straight out of the projects
And that's how we roll.. roll..

[Big Pun]
I keep my Desert Eagle cocked back in my tuxedo with my top hat
What you broke motherfuckers know about that?
Lookin fat in Marc and Pelle leather like Fonzarelli
Sparkin Phillies with the Gods like Makaveli
On the celly (blown Benz, chrome rims)
Shinin like the (stone gems) on my (gold rings)
I got it sewn Twinz, I can't begin to tell you the story
that soared me from livin poorly to a modern day Cinderfella
https://www.coveralia.com/letras/how-we-roll--feat--ashanti--big-pun.php
I've been a killer and a drug dealer, a bugged nigga
But now I'm like Puffy cause money's thicker than blood player
I'm still a threat but now I think before I flip
Call my connects together
and figure which cleaner's the best for the hit
I get the job done, Pun's handlin business
Candlelight dinners, havin a toast with the most glamorous bitches
My road to riches was no Christmas
Now we blessed with gold Lazaruses
so expensive my whole family's religious

[Big Pun]
Aiyyo I want it all you can call me greedy and superficial
long as my crew's official and pulls they pistols soon as I whistle
I'm tryin to triple a million and split it three ways
Joe the God, Full Eclipse, and myself - that'll be the day
I need a way to get it already got the ambition
Start the ignition, watch for the NARCs in the marked Expedition
I'm on a mission which requires a higher position
Desire and vision keeps the fire inside of me glistenin
I'm infinite like math, so I'm gonna last
But you wanna laugh all day, bullshit and sittin on your ass
I'm all about cash and the power
A stash with the power that lasts like hittin ass for an hour
Let's get it locked, I want a watch with baguetted rocks
so I can clock hoes with the glow that never stops
Forget the cops, we got Deserts and glocks too
Ready to rock whoever tryin to stop our cheddar from stockin forever