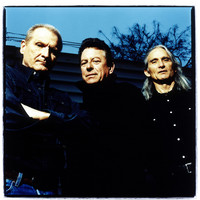 I lost my home when the deal went bust
To the so-called security and trust
I planned my life the way they said I should
I sent my wife and kids ahead
I'm right behind you, so I said
I'll be there when I get there if that's good

Now I'm leaving California for the dust bowl
They took it all, there's nowhere else to go
The pastures of plenty are burning by the sea
And I'm just a homeland refugee

There's a plastic sack by a barbwire fence
A burned out beer truck full of dents
https://www.coveralia.com/letras/homeland-refugee-the-flatlanders.php
A dried up stock pond by an old canal
Between the towns the desert sands
Filling up with empty cans
Container trains, casinos and canals

There's some refugees from Mexico
Behind an abandoned Texaco
We nod and smile, it's clear we're all the same
For everything this world is worth
We're all just migrants on this earth
Returning to the dust from where we came