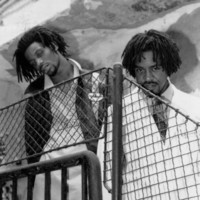 [Background] "I see the horizon the Grate Unknown"

[Ruck]
I'm telling you man cut it out
Yo...we embarked on this nocturnal excursion in order to exchange
Conversation with these mortals not to play games
For real behind every great Ruck theres a Rock
The Rockness Monsta.....Dutch

[Rockness Monsta]
Yo its the Rockness not Rock live
Then again I'm Rock when I'm live
But I'm not fat then again my shit is so fat
Fans let your shot's fly (PLOW! PLOW! PLOW!)
Swift and changeable no style, be Rock style
Not foul, but play with me at your own risk and I might not smile
You get with the pawn, in one arms
I don't fight clean, flow like a butterfly, sting like a scorpion
On the tip of a sick ding-a-ling, bring the noise with your peeps
We up in this space deep, wit' nines like Star-Fleet, ah shit
God bitch ass rappers, and P I'll trap ya, then like a federal case
I'll crack ya word to my man Don Rulla, I'll cold beat your crew up
If it gets thick then number two-a, pass me the ruler
Click Click...Booya!!

[Verse Two]
I turn this upside down, clown
Watch me and you'll get the picture, if ya don't understand
Why I be the Mr. Flipster, rhyme deliverer
Nine slug through your spine, and leave you on the floor vibratin'
Like a fouled line
Find the robbies, lurking in the dark ally
With more nigga, than a motherfuckin' guard rally
Tally up all the throats, the strangler hold choke
That all the riots that my brother Ruck is provoked, don't like my style
So I don't give a WHAT, cuz you bring the beef, and the Rock
All the Rock buck you one time, so cover you by the loggins
Machete I chop that beef you pop, and feed it to my nigga doggen
Follow the trail of broken backs and, at the end of each you'll find
Me standing with my blackjack, with the Smith and Wessun on my side smoke
Another gat
[Ruck:] (Some Illa Noyz be the act for the attack)
Fuck you street fighter, front if you wanna get hyper
I strap on bombs and blow your face up like Stryker
https://www.coveralia.com/letras/grate-unknown-heltah-skeltah.php
Yo representatives light up another ? Spliff, while I dip, by the way
(smack) big up to the ill bitch

(Rock: Rockness Monsta, stomp ya, ? )
(Never changin', forever face rearangin')
(You asked for it who want beef so here's war)

[Background x4 :] I see the horizon the Grate Unknown

[Ruck] We will, we will Rock you

[Verse Three]
Question (What)
Yo, who's the crew with the juice tryin' to front (What!)
Yo money, yo life and wars all I want (What!)
Bring all beef to Bedrock I got my gun (What!)
Niggaz soft as burger buns (What!What!)
Front man shit, spit
On the grave of the weak, when I speak, my tongue is nasty as a freak
I'm in a inner state of, inner mind
Which inner twines, with my inner body now I'm energizes
Its an insane shame, you can ask Ricky Steen
Order b-cheese be sweatin' ,no shorties only gettin' green
BLING! the sound then ? ghost, gone, me and Sean
Your shit's now paid for the Tron, need I go on you damn right
I'm foul as fuck, so if I should go to the line and shoot two (ah, shit duck)
Like James Bond I shoot to kill, Heltah Skeltah's here
Try square with me, clean a man like Mr. Belvedeere
Born in a place so far away it's prehistoric, Bedrock
No regular man survive that ? , from the age of stone
To the age of chrome, from Bedrock to Bucktown my fuckin' names known

[Rock:] (Military Punisher Rock MP)
(Manson punishin' and keep robbing like Danville)
(Scar on my face but I'm not Al Pacino)
(Run for your guns me and self comin' through, Heltah Skeltah)

[Rock] We will Rock you, motherfuckin' knock you..

[Ruck] Beats more western mom do ?
From the land of the darkness Heltah Skeltah....We will, We will rock
You...Word is Born

[Background 8x] "I see the horizon the Grate Unknown"