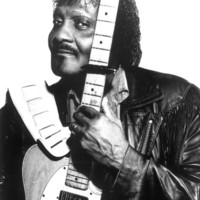 If one thing in this world
I just can't stand
Is bein' at the table wit' an ill-mannered man
Now, if he's sittin' on your left
Before you could eat a bite
He'll reach across your plate
An' you know that ain't right
Now I like to eat, as well as any man
But there's some rules, a fool should understand
When ya have one little helpin'
An' one extra piece of cake
I tell ev'rybody, don't go reachin' across my plate
I was at a party last night, at over Big Murray
Cat reached 'cross my plate
Got a coat sleeve in my gravy
I didn't say a word, just looked him dead in the eye
He reached across my plate, an' cut him a piece a pie
Now I don't care if he did it for a prank
I don't care, if you had a drink
Especially when I'm out, a-with my date
Now don't you go reachin' across MY plate
At a party last week, there was some high-class folks
https://www.coveralia.com/letras/don-t-go-reaching-across-my-plate-albert-collins.php
Ev'rything on the table, an' that ain't no joke
They had barbecue possum1, rattlesnake gravy
Chicken fried skunk2, an' it smelt real crazy
Ev'rything went fine, but one thing made me blue
A cat reached across my plate, for some armadillo3 stew
Now when you at the table, you act real nice
You say, "pass me that" or "pass me the platter"
But just because you hungry, an' happen to come in late
Don't you go reachin', across MY plate
(Spoken:
"Pass some a-that turkey over there, baby!"
"No, don't give me none of that skunk, I don't want none a-that"
"I, I beg your pardon"
"If this cat stop reachin' 'cross my plate, I can maybe ask for somethin'"
"A pass me a little a-that turkey there, baby"
Fading:
Na na na na-na-na-na
Yeah-heya
"Party' nice, party's nice"
"Yeah, ah give gimme some a that chicken over there, baby"
"Chicken fried skunk? "ah no"