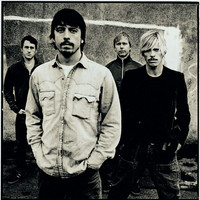 https://www.coveralia.com/letras/baker-street-foo-fighters.php
Way down the street there's a light in his place
He opens the door, he's got that look on his face
And he asks where you've been
You tell him who you've seen
And you talk about everything
He's got this dream about buying some land
He's gonna give up the crack and the one night stands
And then he'll settle down
In this quiet little town
And forget about everything