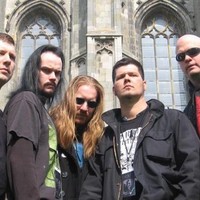 Exhorted by psalms and canticles
These monuments of a crude form of grey shimmer
A Tumult in heaven, the anthems of ecstasy and fear
confuse to seek a less doomed abode
Why should I witness this?
A muted creation taken into a somber and glacial twilight
as ash and dust which held the earth in thrall now lost...
Across the putrid moat
https://www.coveralia.com/letras/ascend-into-the-maelstrom-evoken.php
I lie and dream of my fearful ascent
To a prodigious height entranced by the detestable
Piping of tragic yet mercifull flutes
in the wan beams of paradise
The shadows of shoel now blinding
An effigy of him, the shameless lie this now becomes